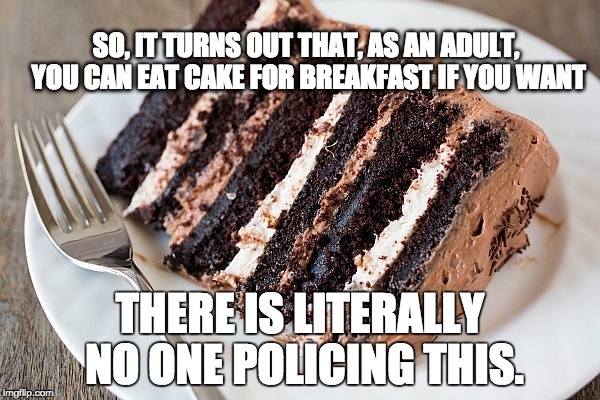 What if I told you that not only is it perfectly acceptable to eat cake for breakfast but it may just help you lose weight?

Don’t be fooled by these Instagram goddesses with their deliciously pretentious chia seeds, healthier-than-thou greek yoghurt, a scintillating sprinkle of seeds and the most super of foods blueberries. A good old-fashioned slice of delicious cake in the morning could very well be the key to a healthier & happier you.

Fortunately you don’t just have to take my word for it. Despite the fact that I came to this pleasant conclusion all on my own, it’s common sense really, it turns out scientists and dieticians alike have been saying the same thing for years.

In fact they’ve actually done test with real life groups of clinically obese, non-diabetic adults. In 2012 researchers split participants into two groups, one consuming a low-calorie breakfast the other consuming twice the amount of calories including cake for their morning meal. They would then go on to consume the same total amount of calories during the day, 1600 for the men and 1400 for the women. After the 32 week study had finished not only had the cake consumers lost weight, they had, on average, lost 40 pounds more than the non cake eaters!

Now there are multiple reasons why eating cake for breakfast might help you lose weight. The most compelling reason would seem to point to our metabolism being the most active in the morning. Let’s think of our metabolism like a miniature sun. At sunrise it’s rising, it gathers momentum and is at its peak at midday, then it glides gently into sunset slowing down and resting. By having a calorific breakfast there’s plenty of fuel inside you to be burnt at that midday peak, this gets turned into energy for you to put towards having a productive and active day. By eating cake later in the day, as the sun and your metabolism are setting, your body is less prepared to burn off the calorie intake and it is more likely to be stored as fat.

Satisfying your cake lust first thing in the morning will also make you far less likely to need to snack on sweets and treats during the day indeed “the group that consumed a bigger breakfast, including dessert, experienced few if any cravings for these foods later in the day.”

Part of the reason why the participants that ate the calorie restricted breakfast failed to lose as much is weight is the fact that they simply cheated on their diet plan. Not having had their sugar fix in the morning they were far more likely to snack in addition to their daily allowance resulting in them eventually regaining previously lost weight.

I put it to you that the trend these days of having a super healthy breakfast is to blame for many people’s inability to shift unwanted pounds. let’s say you start your day with some chia seeds, that have been diligently soaked over night, mixed with a little low-fat yoghurt, maybe a bit of granola thrown in for that crunch factor and it’s not going to get any likes on Instagram without some lovely colourful mixed berries on top. No doubt it will be delicious and leave you feeling healthy, content and emitting that all important smug glow of someone for whom their body is a temple. However, a few hours pass and its time for the first tea break of the day. The biscuit box sits there, oh so tempting, and hey if any one there deserves a chocolate hob nob it’s you, especially after your pre work spin class, you’re starving and lunch isn’t for another two hours yet, you need the energy, go on take two.

Maybe you’re feeling guilty after your mid morning biscuit binge so opt for a healthy salad for lunch, well done you. When you get home you’re understandably famished. Chia seeds, granola, a bit of chicken salad and four Chocolate Hobnobs (you had another two with the afternoon break didn’t you?) were never going to be enough to keep you sustained for the day. You’ve all the good intentions of whipping up a super healthy stir fry, using coconut oil of course, you’re no sunflower oil using fool. Then again there’s all the veg prep to do and your flat mate’s suggesting pizza. You reflect on what you’ve eaten today, you’ve been so well-behaved, you can allow yourself this one bad decision at the end of a long day. So with your belly full of delicious fat and carbs you put your chia seeds back on to soak ready for tomorrows breakfast and go to bed safe in the knowledge that according to social media you’re smashing this healthy eating game, you’ll be ripped in no time!

Compare this to if you’d had a slab of chocolate cake for breakfast. Just imagine the guilt! Are you reaching for the biscuit tin? Heck no, in fact you’d better go without sugar in your tea today. Theres no way you’re having pizza for dinner, not with the rest of the chocolate cake, that you know you’ll be devouring for breakfast, eyeing you from sideboard. You’re going to bed after a healthy evening meal of protein and vegetables. The clear winner.

I should add that if you already eat a healthy balanced diet and manage to avoid unhealthy foods altogether, gorging yourself on cake every morning might not be of benefit to you, but you’re a clean eating genius so you already know that.

The main point is, if you must have your cake and eat it then it’s best saved for the morning. You might get some odd looks at the dinner table when your turn down that sweet spongy goodness but then you get to savour their envious looks over the breakfast table the next morning, you’re welcome. 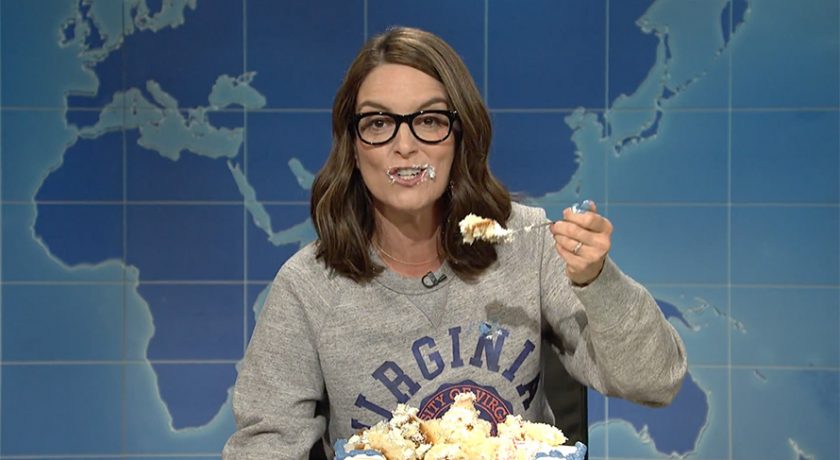 I'm currently working as Chief Officer aboard a 105' luxury sailing catamaran in the Caribbean. Though I'm thinking of sacking off this yachting malarky and trying my hand at something more creative so I thought writing a blog would be a good way to get those creative juices flowing. Please like comment and share if you so wish, any constructive criticism will be greatly appreciated. View all posts by dougal91